How to Cook Borsch

Borsch is the most popular traditional Ukrainian food which is also known as a beet soup. It is a favorite food among all Ukrainians. Actually I cooked borsch a couple of times in the Unites Stated and offered my foreign friends. What I have to say is that they really liked this dish. So, I decided to share the recipe with all of you. 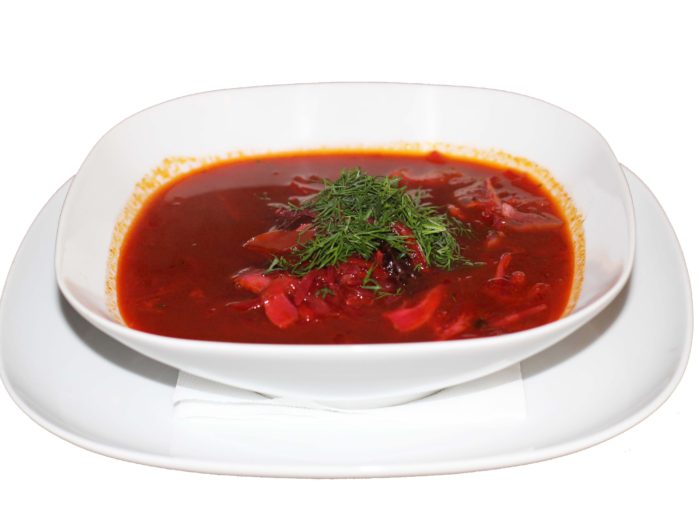 To prepare this soup, you need a fair bit of ingredients, such as meat, 1 onion, 3 large tomatoes, 2 beets, 3 potatoes, 2 carrots, ½ head of cabbage, a little parsley and optionally sour cream.

First, chop all vegetables into small pieces, and grate beets and carrots. Second, fry the onions in the frying pan. After it became golden, add carrots, beets and tomatoes. Fry vegetables at medium heat and don’t forget to stir regularly. After that, cook for 4 minutes more at low heat. Next, pour water into a large pot and wait until the water is boiling. After the water is boiled, put potatoes to the boiled water and cook for 5 minutes. Add graded cabbage, salt and all heated vegetables. Wait for 10 minutes. After that wait till water is boiling again and then turn off the heat. Let the soup cook on its own heat for about 2 hours. Finally, serve it with parsley and sour cream.

It is highly recommended to taste borsch with garlic and rye bread. In addition to the amazing taste, it’s also really good for health.

The heart of Kyiv

I had been living in Kyiv for 10 years. Based on my experience of living in this amazing city I want to share the place you definitely have to visit.

Andriyivski Uzviz (Andrew’s Descent) is my favorite place in Kyiv. It’s one of the oldest and most picturesque streets in the capital. Because of its vivid atmosphere it has become the most popular place after Khreshchatyk – the main street in the city. 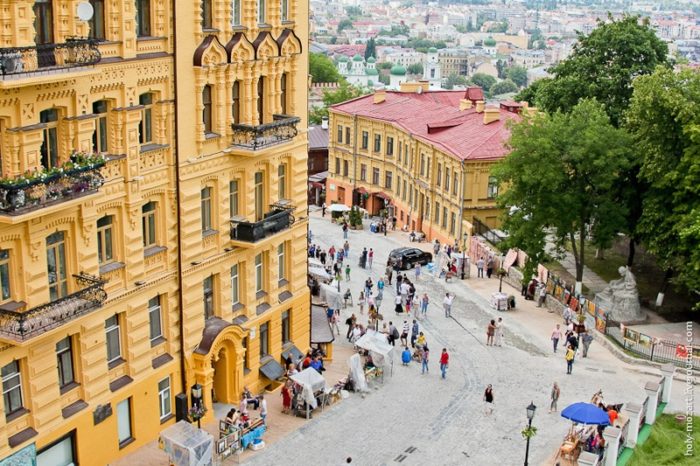 END_OF_DOCUMENT_TOKEN_TO_BE_REPLACED

The most famous carol in the world

Did you know that the most famous carol in the world has Ukrainian origin?

“Carol of the Bells” is a popular Christmas carol composed by Ukrainian composer Mykola Leontovych in 1914. The song is based on a Ukrainian folk chant called “Shchedryk”.

The English version of the song, ‘Carol of the Bells’, was adopted by a popular American composer, Peter J. Wilhousky, in 1921. In 1936, the musician copyrighted his new lyrics in English and the song has gained massive popularity in the United States.

The Ukrainian carol is based on traditional folk chant, which was considered to have magical properties. ‘Shchedryk’ is a derivative of Ukrainian word ‘shchedryi’, which means generous or bountiful. ‘Carol of the Bells’ doesn’t preserve it’s Ukrainian lyrics. The original Ukrainian song tells the story of a swallow flying into a household and saying to the house owner that the forthcoming year for him and his family will be prosperous and generous.

“Carol of the Bells” is a consistently gorgeous song, eminently worthy of inclusion in the holiday canon, with no end of beautiful variations on its iconic four-note loop.

Do you dress to impress or just for comfort?

What really can draw your attention is dressing style in Ukraine. In America I can see women wearing sport pants, or even pajamas, no matter where they go, even to a coffee shop or their classes.

American women dress only for comfort, but in Ukraine dressing culture is completely different. Compared to US mostly Ukrainian women wear heels and do makeup on a regular basis.

Flip-flops. I’ve realized that Americans can wear flip-flops everywhere, even with combination with business suit after work. They just don’t care and comfort is in the foremost place for them. In Ukraine it’s almost impossible to see adequate Ukrainian women in sport flip-flops and leggings in shopping center or another public place.

When I’ve been studying in National Aviation University in Kyiv, so we had a dress code and it was prohibited to wear shorts or flip-flops. There even was a time when we wore a uniform. In most American universities or colleges wearing sport clothes is norm and I was very surprised to see students wearing short shorts

For example, if you plan to visit a theatre in Ukraine, be prepare to wear some business casual style. Sport clothes is inappropriate in such kind of places.

And one more interesting thing!!! Walking NYC streets in winter, many times I’ve met women wearing dresses or skirts without tights or just a jacket with scarf without any coat. How do they feel walking and having red legs as a reaction to cold temperatures? In Ukraine during winter season people usually wear warm clothes: hat, scarf and gloves. There is a common expression in Ukraine “Heat breaks no bones”. 🙂